I recognize this is an odd note to start on; as a writer by love and profession this might be the first piece where I have opened with an emotion rather than an articulated thought. Maria Montessori’s 150th birthday is on August 31 and, as a working parent with a background unrelated to education, I couldn’t be more ill-equipped to honor the impact of her life’s contributions – most notably her revolutionary overhaul of childhood development and education.

Yet my frustration as an everyday parent is more reason to attempt to honor her. It is rare that someone who lived in another century, on another career path, directly stirs real emotions in my own daily life, but that is how life-changing her work was and continues to be. Maria Montessori is more relevant than ever, and I know my husband and I are not the only new parents whose relationships with our children have transformed because of her.

Why did we need transformation? Because social constructs on parenting and the reliance on motherly intuition steered us in the wrong direction in those early, vulnerable days. My intuition, especially without the context of a village, as is so often the case today, was not enough without knowledge. Yet much of the knowledge we attempted to rally was rooted in adult assumptions toward – and often directly against – our children’s authentic developmental needs. We were surrounded by norms of needing to train, contain, distract, and entertain – an ironic dichotomy that can fuel parenting to be both overbearing and dismissive.

Where there is a lack of understanding toward our children comes a lack of respect, often unintentional and blinded by the cultural reinforcement that our adoration is enough. It’s not. Respect is the highest form of love we can give another human being, and it begins at birth. Or it should, anyway.

This is not about varying parenting styles. The Montessori philosophy as applied in the home today stems from straightforward science. Dr. Maria Montessori overcame numerous obstacles to become one of the first female doctors in Italy, which led to a focus on psychiatry and then education, pedagogy. Through scientific observation, she objectively called out prevailing methods of teaching that did nothing beneficial for those deemed “unteachable.” Not only did she call those methods out, but she bridged solutions to them by finding out what children truly need to thrive. Her success, born out of the “Casa dei Bambini,” which is replicated today in Children’s Houses throughout the world, not only brought needed reform at that time in history – changing the lives of those children – but is the exact kind of reform still needed in mainstream education and philosophical parenting to this day.

The movement she started under the founding of “The Montessori Method” cannot merely be relegated to an alternative way of learning or a style of parenting suited for a few; the core of her method, as validated and carried on by many other amazing contributors to childhood development, should be our default as it calls for respect, peace and understanding. All children, parents and educators desire and deserve this.

While the Montessori movement is thriving and reaching more communities than ever before, we are still up against pervasive constructs that belittle respect, peace and understanding as lesser focal points rather than foundational building blocks. I felt this when I discovered Montessori three years ago. Acquiring the knowledge and skills needed to instill a richer, more meaningful relationship with my children, where they were seen and treated as whole, capable individuals, was oddly an uphill battle. In my commitment, and duty, to better understand my children, I was often misunderstood.

It started from birth when one of the most common pieces of advice I received was to, essentially, be less responsive to my dependent newborn whose needs were every bit as valid as mine. My inclination was to put more energy toward bonding and observing, which were often seen as giving too much leeway to my baby as a capable person. I received a ton of versions of “If you don’t train your baby to do xyz, your baby will never xyz.”

As they grew a bit bigger and began hitting first milestones of independence, our uphill battle continued, particularly with the ways in which Montessori helped us better trust our children to physically do, care, and move for themselves. The discomfort of loved ones around us was blatant even in the smallest of choices, like letting them eat meals with real silverware and drink from open cups, climb the steps at the playground without our hand shadowing, or overhaul their bedrooms from cribs to floor beds so that they could navigate safely on their own. I was told that I was endangering my children, rather than being seen as supportive of their gross motor development, risk-assessment and autonomy.

Our children don’t need to be contained; they need space, trust and freedom within limits.

Then the great toy purge of 2017 marked the start of an awkward gripe in which we were viewed as being snooty and strict for paying attention to the kinds of exposures and things we were preparing for our children’s absorbent minds. Our preference for hands-on learning in which they are asked to be active participants in their chosen play was received as being anti-fun in contrast to the aisles of light-up, talking toys that do the action on behalf of the child. Play is not something that happens to children, provided by an adult or an object; it is something children construct themselves and that is meaningful to them.

Our children do not need environments that distract and entertain; they need an environment that invites them to discover, concentrate and create. 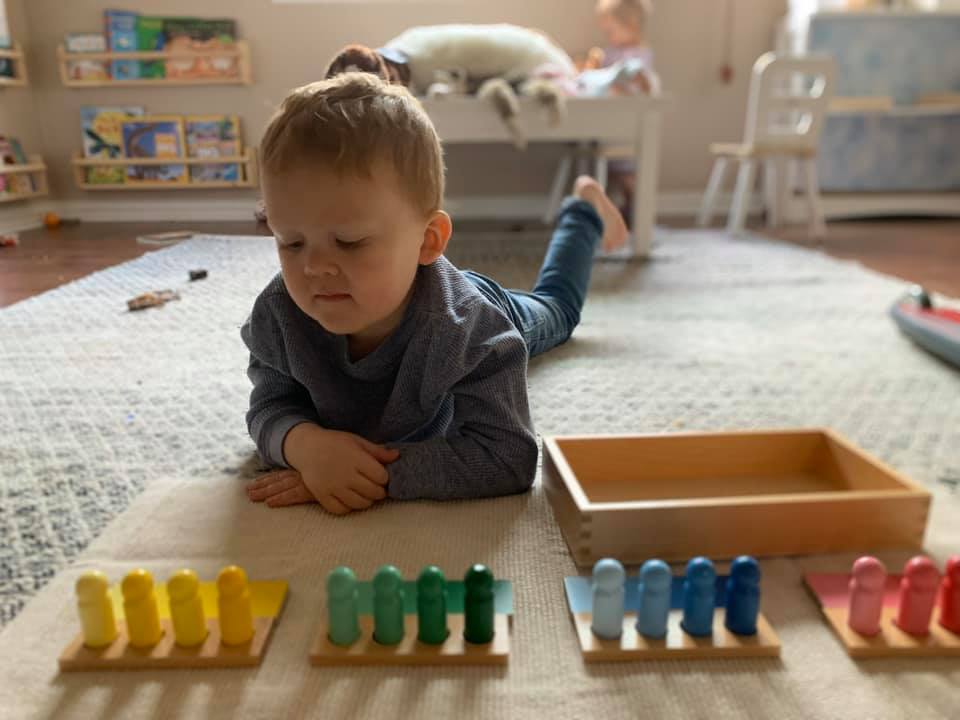 Then, when it came time to choose our formal path of education, I was awestruck at the ways in which Montessori education differed, despite these differences being exactly the solutions needed where mainstream schooling leaves gaps.

None of this was intuitive to me or largely modeled around me. It was discovered in time, happenstance from a few outliers in my circle who did this “Montessori thing,” which, at first, came with so many misconceptions of it as being an exclusive, alternative path, reserved for the wealthy who could afford fancy shelves of wooden toys (it’s not).

When I dove into it firsthand and grew to better understand what it was about, shelf work aside and on a humble military family income, I quickly became labeled a “Montessori mama.” As I prepare for our third baby this October, this is a label I’ve grown to dislike. I am not a Montessori mama; I am just a mom like anyone else.

The choices I make to nurture my children should not be considered “other than,” because there shouldn’t be an alternative to intentionally meeting our children where they are in their development. My role as a young parent is not to accept the often glorified “survival mode” as default, where a disconnect easily grows between myself and my children. It is to lean in and lead with grace and guidance through those inevitable moments of survival so that we may then aspire to thrive in peace, respect, unity, connection, understanding and purpose.

And the role of the education system in our children’s schooling should not be hyper-focused on academics with the end goal of graduation. It should be hyper-focused on ensuring we are instilling a genuine love of learning that endures a lifetime – where knowledge is valued, not regurgitated; where children are free to individualize their path, not be standardized; and where a child’s social experiences are not confined by the bounds of our adult pace, but are empowered by the limitless bounds of their own connection to the real world we live in.

Jenna is a former journalist whose writing continues in areas where her passions get sucked into mission-oriented work, most recently with the international Montessori movement alongside Higher Ground Education – a 4-year-old California-based organization that operates the world’s largest Montessori school networks, Guidepost Montessori and the Academy of Thought and Industry. When she’s not working, writing or diving deeper into the Montessori philosophy, she is embracing the early days of parenthood as a mom of three. 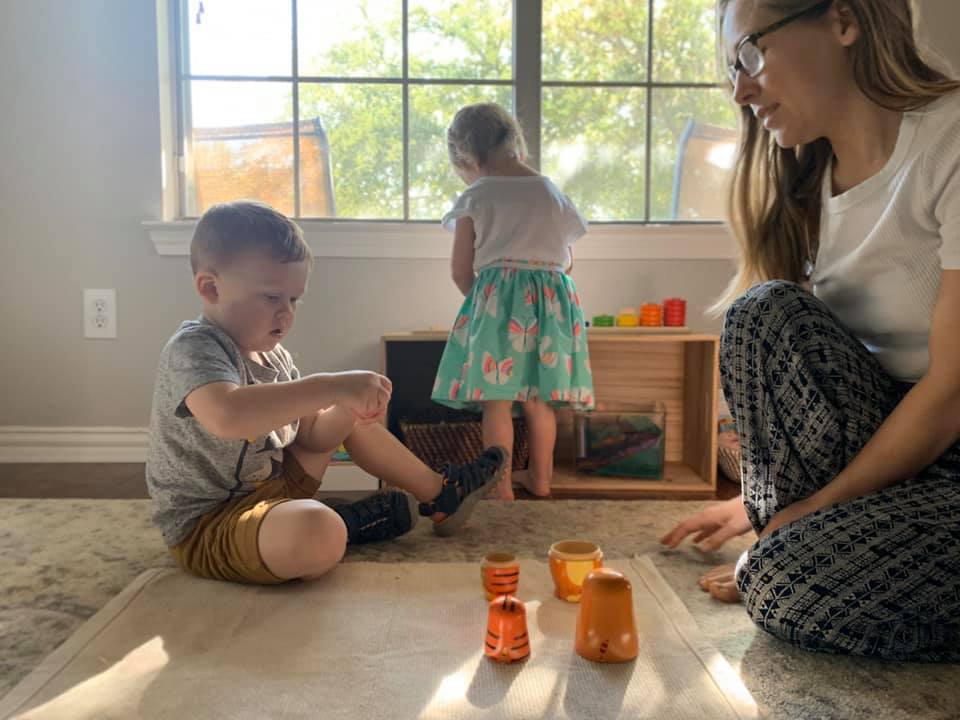