India Tate and Raye Thomas, known on Instagram as the Montessori Melanin Mamas, fell in love with the Montessori Method. But because of Montessori's prevailing reputation as something elitist and inaccessible, they worried it might not be the right educational model for their families. Whenever they looked online for inspiration, they were confronted by the off-putting reality that not many people sharing their Montessori experiences are people of color. For two black women, both issues were good reasons to give them pause.

But instead of letting the lack of diversity put them off, Tate and Thomas jumped into Montessori homeschooling with both feet. They created Montessori environments in their homes from scratch, and started sharing their ideas and activities on their popular Instagram account, which has inspired other families to try Montessori for the first time and strengthened the online Montessori community. We caught up with the Melanin Mamas for a quick chat about how they discovered Montessori, why they decided to use it as a homeschooling method, and how Montessori is more about the lifestyle than the stuff.

Tell us about how you discovered Montessori

Raye Thomas (photo, above left): Hey, I'm Raye from Atlanta, Georgia, and I'm Mom to a two-and-a-half-year-old called King. I discovered Montessori when King was about 12 months old. Looking online, I found a lot of moms who were practicing Montessori at home. But there weren't many of them who looked like me, and I kind of shied away from feeling like Montessori was something that I could do from the beginning. I didn't have all the expensive materials and super organized shelves. Looking back, I really wish that I did because it goes hand in hand beautifully with the gentle parenting style I follow. It took me a while to try Montessori at home. Without a big budget for learning materials I thought, "Okay, I'm going to look at the resources I do have," and I really focused on the philosophy over the stuff during that initial period.

India Tate (photo, above right): I'm a mom of two boys; the oldest one is almost three-and-a-half years old, and then the youngest will be two in March. I'm from Atlanta, which is how I met Raye, but now live in the Bay Area of California. Raye actually introduced me to Montessori. I had no idea what it was, but she started talking about it one day and I was like, "What is this?" So, after her explanation, I did a little bit more digging, and I reacted in pretty much the same way Raye did. I took a step back and reassessed my home environment so that I can use what I already had to create a calm work space for my children, rather than go out and buy a bunch of expensive materials. 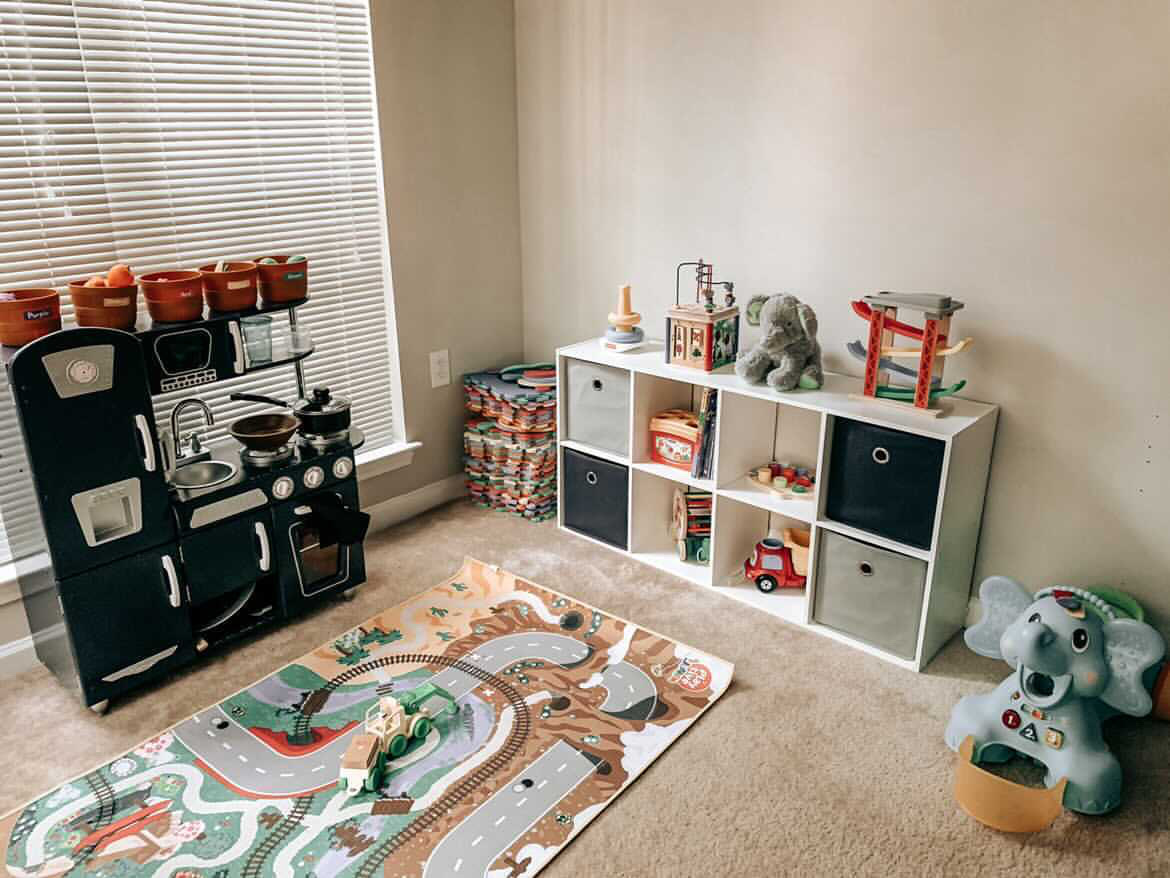 Thomas used a storage unit she bought from Target to create her first at-home Montessori environment. "I literally got fed up looking at the playroom one night, strapped on my baby that was whining and refusing to sleep and decided to go for it!"

Montessori Melanin Mamas on Instagram: “Throwback to our first ever #shelfie 😆 Back then, I KINDA understood Montessori, but I didn’t know how we would afford it if we needed all…”

Why did Montessori appeal to you as a homeschooling method?

I.T.: When my eldest was born, I felt like we were just kind of winging it as parents. You know how new parents don't really know what to do or what to expect... And then, when I learnt about Montessori, I thought, "Oh, this definitely aligns with the way I see us parenting. So, let's look into it more deeply and see if we can incorporate the teaching methodology." Montessori ended up giving me a structure through which to parent, not just educate, because of the way it values and respects children from birth. Respect is really important. I want my children to feel valued and respected, not only because of the effect it will have on their self-esteem, but because deep down, it feels right.

R.T.: I was researching different parenting styles when I was still pregnant with my son, and I became aware of various parenting methods, like attachment parenting and gentle parenting. I found the Montessori approach to be a holistic concept that goes way beyond education; it's about following the child and respecting them as individuals, and understanding where they are developmentally so that when you place different expectations upon them, the expectations are appropriate and achievable for the child.

Do you have any advice for parents who want to bring Montessori into their homes?

I.T.: Don't doubt yourself. Just jump in there and do the best you can with what you have, because no Montessori home is perfect; and no home needs to be perfect because nobody's perfect. So, if you want to start by putting your child's toys on the floor, then put them on the floor, lined up against the wall until you decide whether or not you need a shelf.

R.T.: You need to respect your child's need for independence. I agree with Maria Montessori that the birth of a child is the child's first act of independence. But I feel that, especially in the United States, birth and early childhood isn't respected a lot of the time, and adults are encouraged to rush things rather than respect the natural flow of life.

I.T.: You don't need all the fancy things to get started. I would make a list of the materials you'd like to invest in later on, but don't let that stop you from getting started. You don't have to have a picture-perfect Montessori home. Your home is supposed to be your safe space for your children. It doesn't have to replicate the classroom; it shouldn't replicate the classroom.

R.T.: I totally agree with India. Don't compare your home to the Montessori photos on Instagram and Pinterest. Read books and understand what Montessori philosophy truly is, and then you'll understand that something as simple as how arranging your space can help the environment be more prepared for your child. Activities as simple as unpacking the groceries can be so fulfilling for a toddler. It's all about involving your child in the things you normally do, especially when they are very young. Things like meal preparation, tidying, cleaning, and taking care of things like plants all help young children meet their developmental needs. 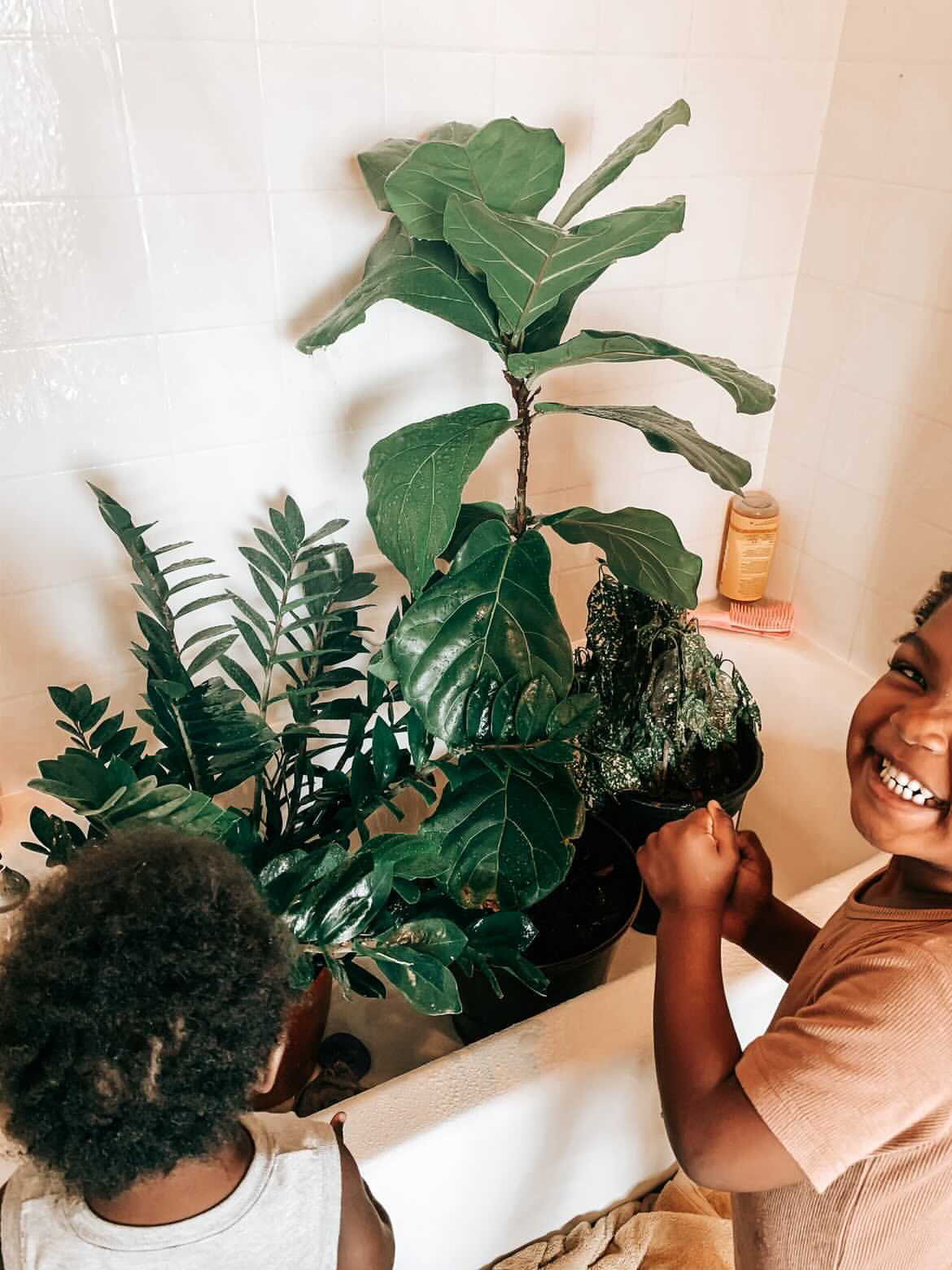 One of Tate and Thomas's most popular posts was of Tate's sons watering plants in the shower. "I think that's the thing that kind of sets our page apart, we don't post a lot of like shelfies or stuff like that,” says Thomas. “I feel like people can relate to it and it makes Montessori seem simple and attainable."

Montessori Melanin Mamas on Instagram: “On Fridays we water the plants and give the big ones a shower 🌿😉. Practical Life skills, such as tending to our house plants helps them understand what it means to care for something else.”

R.T.: We still feel overwhelmed by the positive feedback we've received about our account. I don't think either of us ever thought it would get so popular. We just wanted to share how we are doing Montessori in our own way. People have sent us messages including, "Thank you! It fills my heart so much to have found you and few other black Montessori moms", and "LOVE your page! Learning so much from you!" It's really touching, and incredibly nice for us, connecting with other Montessorians out there.

Even with an online community, homeschooling can be challenging and isolating at times. What do you do in moments of self-doubt?

I.T.: We call each other. We became friends back when I was living in Atlanta and we realized how much we had in common, both being doulas and becoming new moms. We're still good friends, and our sons are still pals too. Sharing our Montessori journey with others has also strengthened our friendship along the way. We usually always talk to each other in moments of stress, so even though we're far apart, I know there's always someone I can reach out to.

This interview has been condensed and edited for clarity.