Lake Norman duo lean on one another, inspire Guidepost community 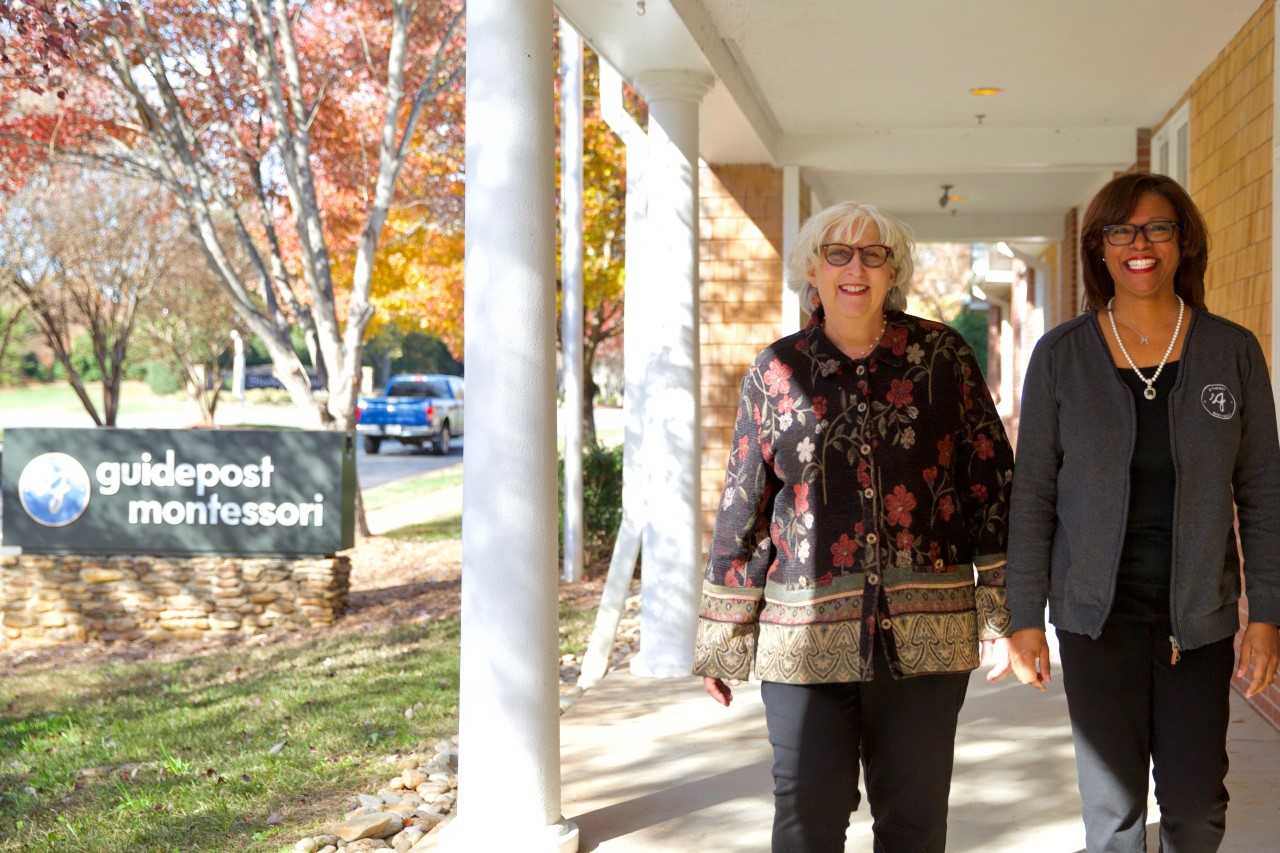 Dolores Murgolo and Tomeka Bostic have been working together since the beginning of Guidepost Montessori, over three years ago. In fact, the growing network of schools that now has nearly 50 campuses worldwide was built from the backs of their own learning, in a little Montessori school in North Carolina.

But that was then. Today, they’ve since opened another Guidepost school side-by-side, and their love for the work — and for each other — grows as exponentially as Guidepost itself.

These two are something special.

“We’re all visionaries in this, and we’re all executors in this,” Tomeka says. “The mission and the vision of Guidepost gets clearer and clearer as the days go by, and we are so grateful to be a part of all this.”

Tomeka and Dolores’ background, and the beginning of Prosperity

Three years ago, Tomeka was seeking a better school for her son, who was then in enrolled in a public school kindergarten. On their drives to school in the morning, he would say things like, “Why are you bringing me here? I don’t like this place!”

“I was a frazzled mom,” Tomeka says. “I could see that my child’s little flame flickering inside him was just dimming every single day, and it broke my heart!” 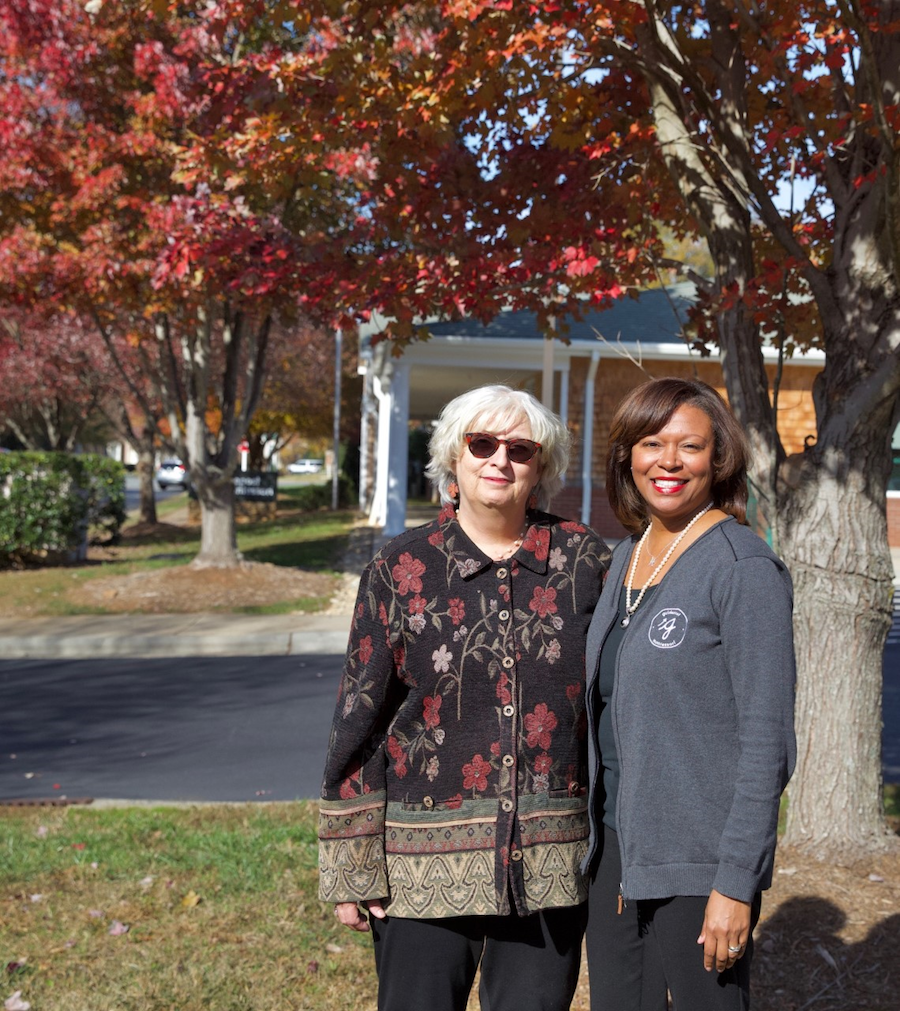 Like most Montessori families, she was online and happened upon Countryside, a Montessori school that was near her husband’s work. She went in for a visit, and it was then she met Dolores.

“My first recollection of Tomeka is her sitting in my office crying,” Dolores says. “She was looking for a school for her son, and we just had one of those relationships that caught on quickly. We’ve been working together ever since!”

At the time, an art teacher at Countryside was leaving, and work in admissions was needed as well. Not only was Tomeka looking for work again, she wanted to be helpful to other families starting at the school.

“My son is a very visual learner, very concrete and hands-on, and my only intent was just to find the right educational environment that was going to be more of a holistic, therapeutic approach for him, where he could thrive,” Tomeka says. “I really had no intent at all to work here, but I just felt like I could be good in this role!”

So she joined the team, but it was at a time that the school itself was in transition. Less than a year from Tomeka coming on, Countryside’s campus closed and Dolores had to leave.

“It was a lot of chaos, I was gone for the whole summer! But then along came Guidepost,” Dolores says.

It was even Tomeka herself who was vying for Dolores to return as Head of School for what was now transitioning into Guidepost Montessori at Prosperity.

“Hands down, I just knew I wanted to work with her and that we could be a good team,” Tomeka says. “It was a very, very tough time trying to make it all happen, but I think all of our hearts and minds were in the right place, and we just wanted to save the school by any means necessary.”

Dolores was dedicated, too. She had been with Countryside almost 30 years before Guidepost acquired the school. Her two sons, now grown, began there along with her.

“This was decades and decades ago, but before this, I was a bond trader on Wall Street for 13 years,” Dolores says. “My husband works in stocks, and it was during a time when banks were becoming brokers, and my husband helped convert banks. So we moved from New York to Irmo, South Carolina, where we lived for two years. It was a big journey. Our first venture to our new home was we had to stop and wait for the Okra Festival to pass! It was a completely different life.”

From there, they moved to Charlotte, North Carolina, where a little Montessori school called Countryside sat across the street from their home. It was then they enrolled their two sons.

“I first began to volunteer, then I was a substitute, then it was, ‘Ok, maybe I’ll be an assistant,’ then I completed all my training for primary, lower elementary, upper elementary, and middle school, and it just kept going like that,” Dolores says. “And the school and surrounding community was growing leaps and bounds over the years, too! I loved every minute of it.”

Success of Prosperity and onto the next

Years later, Tomeka and Dolores began to settle in as the dynamic duo at Prosperity, working hard and working fast. When they first began, there were 70 families enrolled in a school that had capacity for 200. So they set out for that number and didn’t rest until the challenge was met.

“One thing we have learned about ourselves is that we like to think we are very laid-back people, but we are actually really competitive!” Dolores says. “Tomeka was the missing piece that Countryside needed, and she has done so many incredible things with enrollment.”

Tomeka credits her background in therapeutics for the tenacity.

“I worked in long-term healthcare for many years,” Tomeka says. “I was always setting goals for the patients I was working with, and so I look at this job as just helping families to meet their goals with providing a quality, Montessori education for their child. I don’t sell the school — the school sells itself! What I am doing is educating families about this therapeutic environment for their child. I look back and connect the dots and realize now that everything in my life was just creating a pathway for me here.”

In their tireless efforts, they quickly saw that Prosperity was doing well.

“Once we reached our goal, we genuinely did feel that the school and the families there were in a very good place,” Dolores says. “And we’ve also come to the realization that there are always going to be challenges — there will always be things you face every single day. We’ve been through a lot, but it’s work you have to do, and it’s always worth it.”

So as forward-thinkers, they spoke up, said they wanted to do it all over again and open another Guidepost school in Charlotte — together — and persisted until they opened Lake Norman this fall. Dolores is now the Head of School, and Tomeka is right by her side as Assistant Head of School.

“I spend most of my time enrolling and connecting families — just building our community,” Tomeka says. She enrolled nearly 50 families within a summer season alone, and Lake Norman has nearly 60 students today.

“We’ve gone through the training, we understand the data, and we know the culture well, so we knew we could do this again,” Tomeka says. “I now want to be able to help other admissions directors in Guidepost understand how the life cycle of admissions and enrollment works.”

Dolores agrees that she sees the two of them in more of a mentoring role moving forward.

“The two of us understand people,” Dolores says. “Once families see children at work in a Montessori classroom, the school does sell itself, but the hardest part is continuing to guide families as they enroll, and we do that together. We thoroughly enjoy what we do.”

Tomeka says not only are the two of them open and honest with one another — “I don’t have to hide who I am with Dolores!” — they’re problem solvers who challenge one another toward a solution.

“I want to be the best version of myself each and every day — I cannot give anything less — and I know I can rely on Dolores to do the same exact thing,” she says. “We come together like two wrecking balls!”

Dolores agrees that the two of them can come on strong, but she knows without a doubt they make a good team because they care about one another, and they care about the success of Guidepost.

“I’m not just the Head of School here, and she’s not just admissions,” Dolores says. “We do things together, we share everything, and we rely on one another. That seems to work for us! We’re both very dedicated to these schools.”